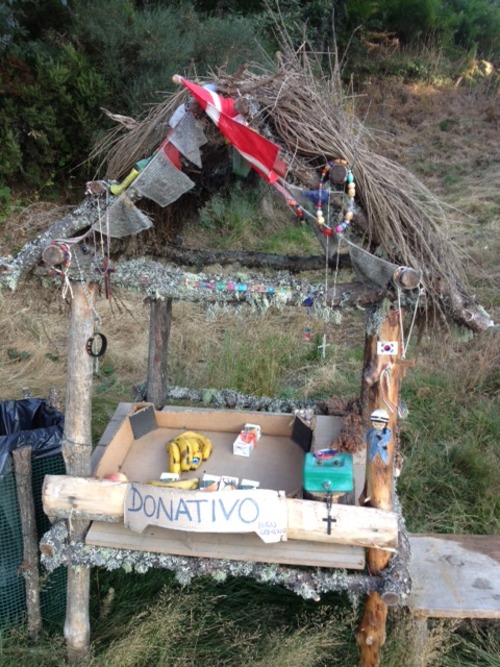 I had some coffee and bread before setting off very early this morning. I planned to get some breakfast in one of the mountain villages shown on my map. But after walking over 12 kilometres (about 8 miles) and two hours, uphill, over the camino alto, I hadn’t found any food and was starting to feel my energy level drop. After passing though Manjarin, a village with a population of 1, I was starting to get concerned about finding some food. I needn’t have worried. A mile beyond Manjarin, on the most remote little track, I suddenly came upon a little stand with fruit and juice that had been set out with a little cash tin for donations. I thankfully gave a donation, said a prayer of thanks and had my breakfast.

Last week I walked for two days with a lady from Holland that had started her camino walking from her home over two months ago. She appeared deeply religious having converted to Catholicism five years ago. She expressed the importance of religious knowledge and appeared sceptical of feeling the spirit of God. She said she had no sense of God’s presence and was amazed when I told her that I believed that God walked with me and I could talk with God just like I was talking with her. To explain my faith and my sense of God’s presence, I told her of some of the things that I received which I believed were blessings and reassurances from God. I was amazed when as a woman of faith, she stated that these things were probably just coincidences and nothing to do with God.

Our conversation made me really think about God’s activity versus coincidence. In the end, I decided that I would rather see God in everything and be wrong, than see God in nothing and be right.